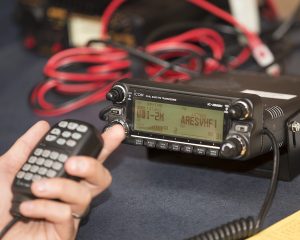 On Saturday, July 16, 2016, PWCARES conducted our regular training outside at the Prince William County government facility. During this training we did two things:

Chuck, KA3EHL, demonstrated how to remotely control a radio. The use case for this is in case we have to use HF, but we cannot run wires. For example, at the EOC, where the building has to remain secure. There are two parts to the system.

The first part is the remote system, a laptop running Windows and the TeamViewer software. The second part is the host station, connected to the HF radio, running TeamViewer software, and additional digtial software and radio control softwere. Chuck’s radio, an IC–7200,[2] comes with control software, but you could easily use FLRIG if your radio supports it. Chuck demonstrated sending a message with FLDigi, set to the Olivia[3] transmission protocol.

This is possible by setting up a BBHN[4] mesh network. TeamViewer needs a network connection, whether that connection is a Local Area Network (LAN), an Internet connection or a BBHN mesh connection. Chuck had flashed two Linksys routers with the BBHN software and connected each laptop to the router. Each router was powered by its own battery, but could be powered by commercial mains if available. He then sent a message which was received and responded to by Larry, K0LB, and was also seen at Tom, W4PIO’s station on the other end of the field.

Chuck’s full presentation is posted to the PWCARES website in Operating Procedures[5].

The second part of the exercise was the sending and receiving of messages using FLDigi. This exercise utilized the standard setup for FLDigi in a VHF environment[6]. We had a couple of team members operating from their home station as well as some in the field. There was a combination of radios and laptops and as we have discovered in the past, just bcause it worked yesterday, it may not work today. Each problem was worked through as it came up, and some problems will require a bit more research.

Thanks to those who came out and those who partcipated from home.

Because of the high temperatures expected, we will move the beginning of the exercise back to 0830 EDT .

If you are not coming out, but are going to be around during our training hours, please feel free to jump on the air and participate as well, either by voice or digital means.

We will be conducting a multi-pronged exercise.

Chuck, KA3EHL will demonstrate remote control of an HF station, using BBHN. This should be quite interesting!

As part of the demonstration of remote control, we will do some HF digital work. Coordination and details of the HF digital part of the exercise will be hashed out over the next couple of days with the parties who have volunteered.

We will follow our normal plan of operations for VHF digital (see the Action Plan, section 6.11 for details). This is a good chance to come out and get your gear working, configure your gear, or find out more about digital.

Please make sure you have the FLDigi software loaded prior to coming out, as we will not have reliable Internet connectivity.

Please bring a sample ICS–213 form as we will do some voice message traffic work as well!

The weekend of June 25 – 26, 2016 was Field Day, an opportunity to get on the air, test out some gear and generally have a good time operating. While many Amateurs were busy with Field Day, a small group of PWCARES members were participating in Operation United Resolve, a national communications exercise. The scenario was:

A series of catastrophic events across the United States has occurred. California has been hit by a massive earthquake causing extensive damage as well releasing a tsunami which has hit Alaska causing damage there, the central states experienced a derecho wind storm that caused extensive damage to the power distribution system, and at the same time a F5 hurricane travelled up the eastern seacoast flooding coastal areas. Additionally with these natural occurrences, various areas of the country are experiencing sporadic power outages of varying durations and fluctuations of unknown origin.

Many Governors state that their emergency management resources are overstretched and are asking neighboring states for assistance. As part of the recovery effort, SDFs across the US are mobilizing to assist their state Air/Army National Guards as they are called to active duty. Establishing reliable communications is a part of that effort and is the first step in determining who can communicate and what their local operating status is.

While a bit unrealistic, any one of these events could lead to a national call up of resources and strain the system.

The bad news is that the exercise never really seemed to get off the ground, at least as far as we could tell from our listening post at PWCARES headquarters.

The good news is that, even from this small, non-exercise, things were learned.

Despite only hearing two calls on the frequency we were instructed to monitor, and neither one of them requiring us to call back, we had a good exercise and everyone learned something useful.

My thanks to Brian, WC4J; Mary, KK4GOW; Derek, KV4SH; and Jack for coming out and exercising, and Jeff, WB6UIE; who was remote but proved we were getting a signal out.